Anindya Chatterjee, the name that got associated with the temporal coherence piece named Jhumura had done a serious, yet comical overview for television few years ago. It was a telefilm named Shudhomoybabur Advut Galpo produced for Tara Muzik. 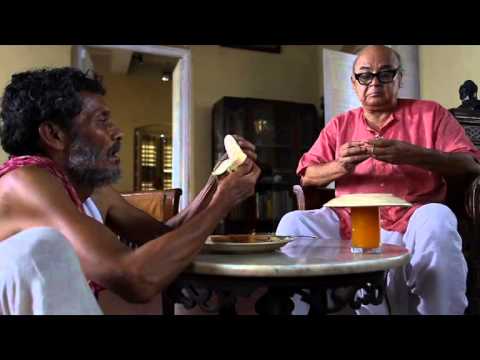 The piece has been developed in a manner that might not seek the attention of many, but the classes may surely get appealed to. However, there are more reasons to review a 15 minute telefilm amidst the features that Aamraunmaad has been reviewing in the recent past.

In the telefilm, Shudhomoy Babu has been shown to be obsessed with ‘Time’. Magnificently, it receives an apt beginning with the protagonist pacing down the streets (dictated by his clip watch); the scene is complemented with pungent calls at him eager to possess the watch he owns. Bang! A nightmare and nothing more than that; a series of continuous nightmares and the fear of not being able to cope up with the stopwatch haunts him.

Talking of the filmmaker’s vision, he has displayed a clear approach that could be adopted in a short film and has done justice to it. Apart from this, temporal adjustments are up to or even beyond a viewer’s expectations which may go away from the pseudo-intellectuals and might only the viewers who grain similar taste in arts and aesthetics; kudos to the acting skills of the protagonist, Manoj Mitra, playing the character of Shudhamoy Babu. Another brilliance noted is of the camera adjustments where the angles have been adjusted in order to project a superior view of the prime subject, which depicts the auteur’s wisdom.

A smooth, characterized narrative that depicts the temporal suffocation if implicated in our lazy hours; hence, it strongly puts emphasis on the fact that one can never be on time, either late or early is fine.